Home Tennessee is serious when it comes to our lakes, the story of Reelfoot Lake and the Night Riders

Tennessee is serious when it comes to our lakes, the story of Reelfoot Lake and the Night Riders

Reelfoot Lake was formed during the New Madrid earthquakes of 1811-1812.   During the quakes the Mississippi actually flowed backwards for a day creating the lake.  Reelfoot Lake holds the distinction of being the only large natural lake in the sate.

The lake does have some dark history, in the early 1900’s the locals in the area believed the lake was public territory . However a group of people quietly bought up old claims to the shoreline and formed the West Tennessee Land Company. The West Tennessee Land Company wanted to drain at least part of the lake and use the land to grow cotton. They began to enforce their ownership rights and kept locals from fishing in the area.

The Night Riders (made up mostly of locals who made their living from fishing the lake) began to enforce vigilante justice over a portion of Obion County.  For seven months in 1908, masked horsemen rode roughshod over a portion of Obion County and imposed their brand of justice with whip, arson, and shotgun. But if the riders are judged guilty of excesses, their adversary, the West Tennessee Land Company, with its example of callous greed, must share in that guilt. 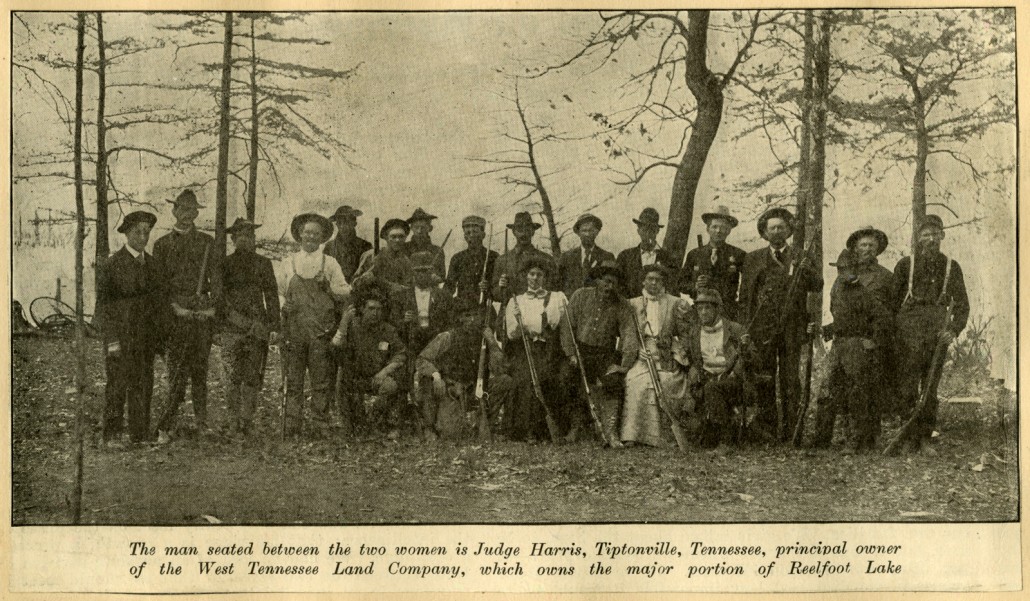 They set fire to storehouses, shot at the judge who ruled in the land company’s favor, and, on the night of October 19, 1908, committed murder. 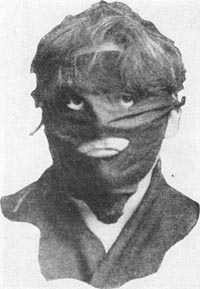 Attorneys Colonel Robert Z. Taylor and Captain Quentin Rankin, veterans of the Civil War and the Spanish American War respectively, worked for and were stakeholders in the West Tennessee Land Company. 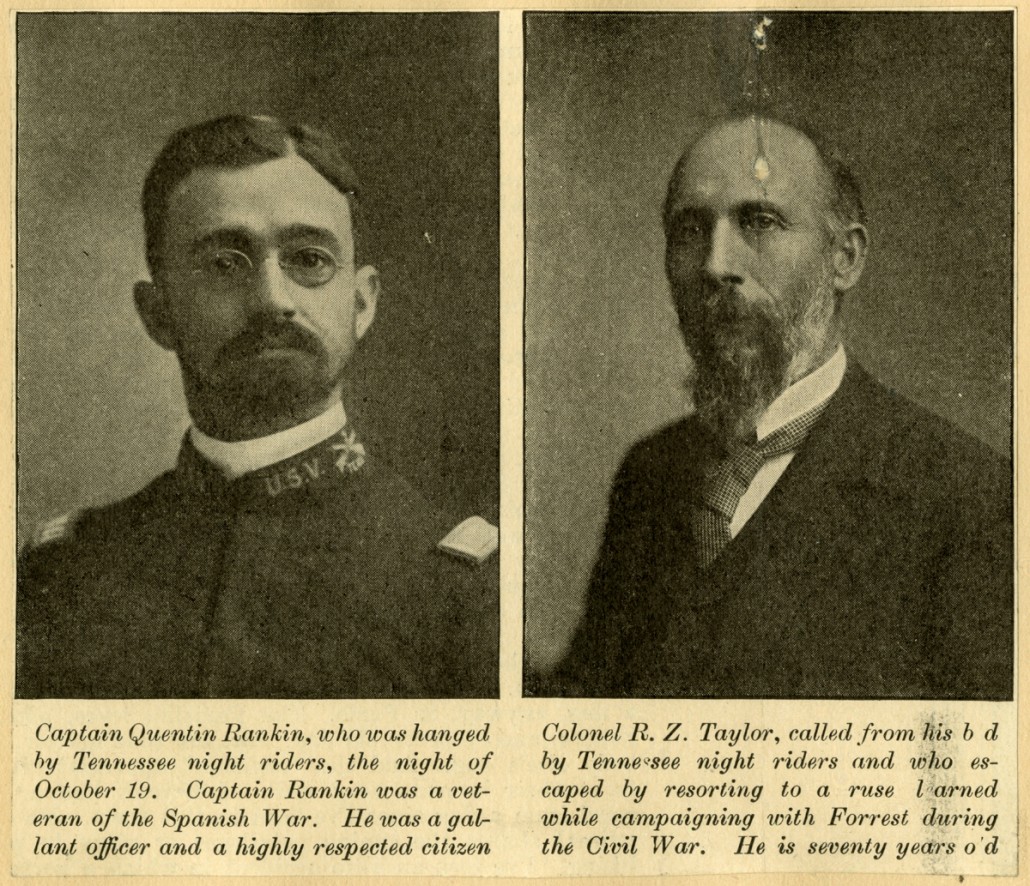 On October 19 they were forcibly abducted from their beds at the Walnut Log Hotel and taken into the woods. Rankin was hanged and shot, but Taylor managed to get away and jumped into the lake.

To prevent his surviving and possibly telling the tale, the Night Riders shot into the lake at least thirty times to kill Taylor. He was presumed dead. Fortunately for Taylor, he was able to hide under a cypress log, and he was found over 24 hours later, wandering and bewildered. 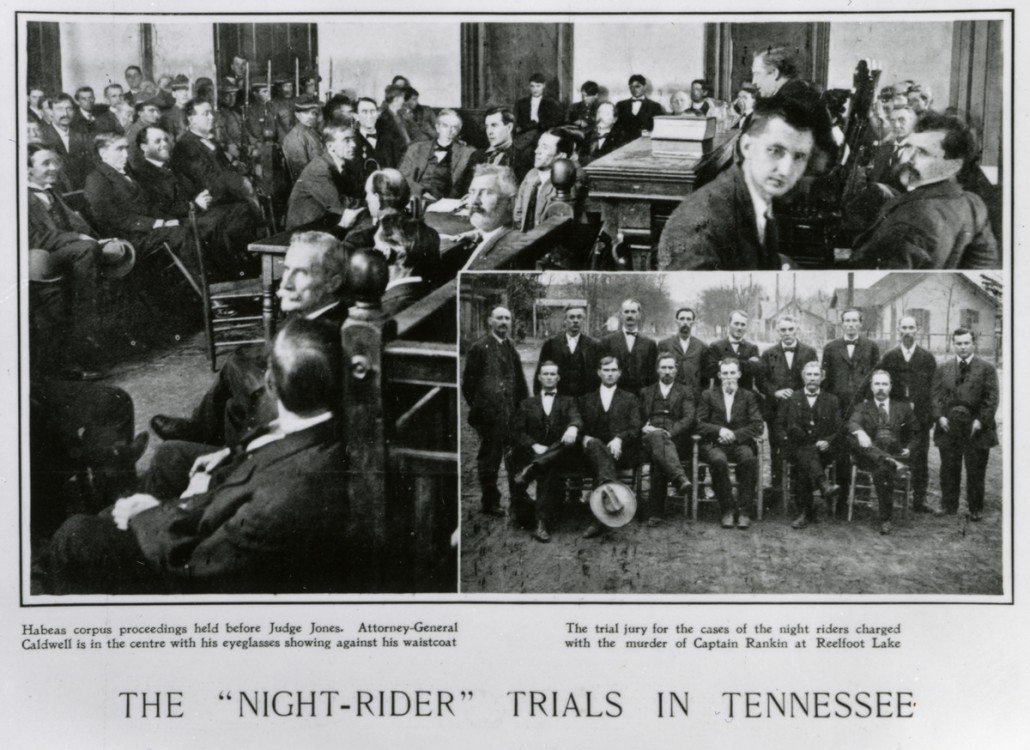 The masked horsemen created a reign of terror that lasted seven months. Governor Patterson took firm action. He called in the Tennessee National Guard to keep order in the area. He offered a $10,000 reward — dead or alive — for those responsible for the killing.. Nearly one hundred suspects were imprisoned in a makeshift camp set up by the Guard. The suspects were treated severely and two died while awaiting trial. Most of the public supported the Night Riders. Over 300 people were indicted, but only 6 were found guilty of murder. These six people were sentenced to death, but the Tennessee Supreme Court overturned their convictions in 1909. 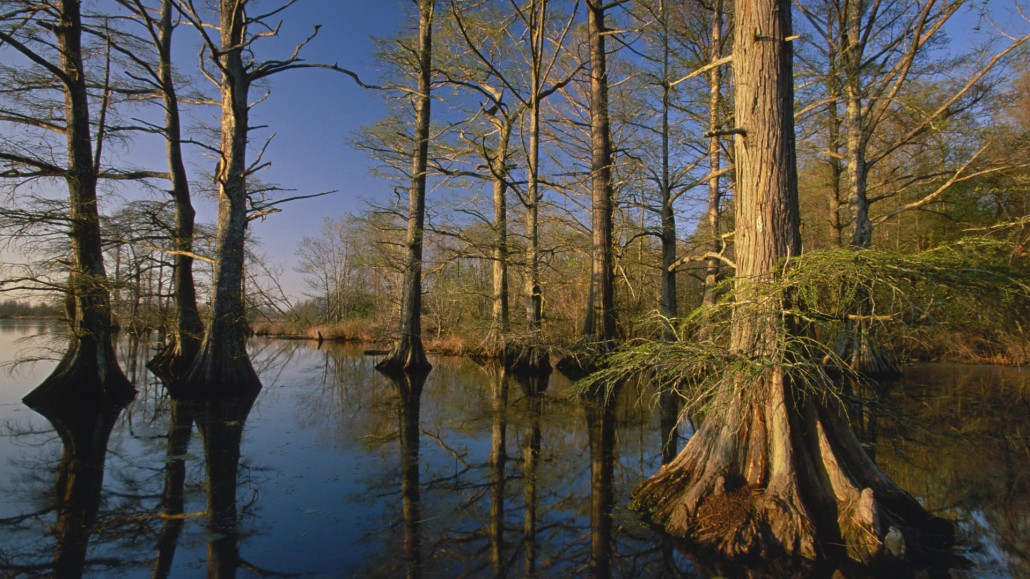 To keep this from happening again the state wisely purchased the lake in 1914 to end the threat of private ownership. Today visitors and fishermen can visit the beautiful lake and see the bald cypress trees and often spot a bald eagle without having to worry about running across any Night Riders or ahving the lake being taken over for a private business.

The grand Read House Hotel and it famously haunted room 311Did a Tennessee woman live to be 150 years old?