The most unoriginal town name in America, presenting Nameless, Tennessee 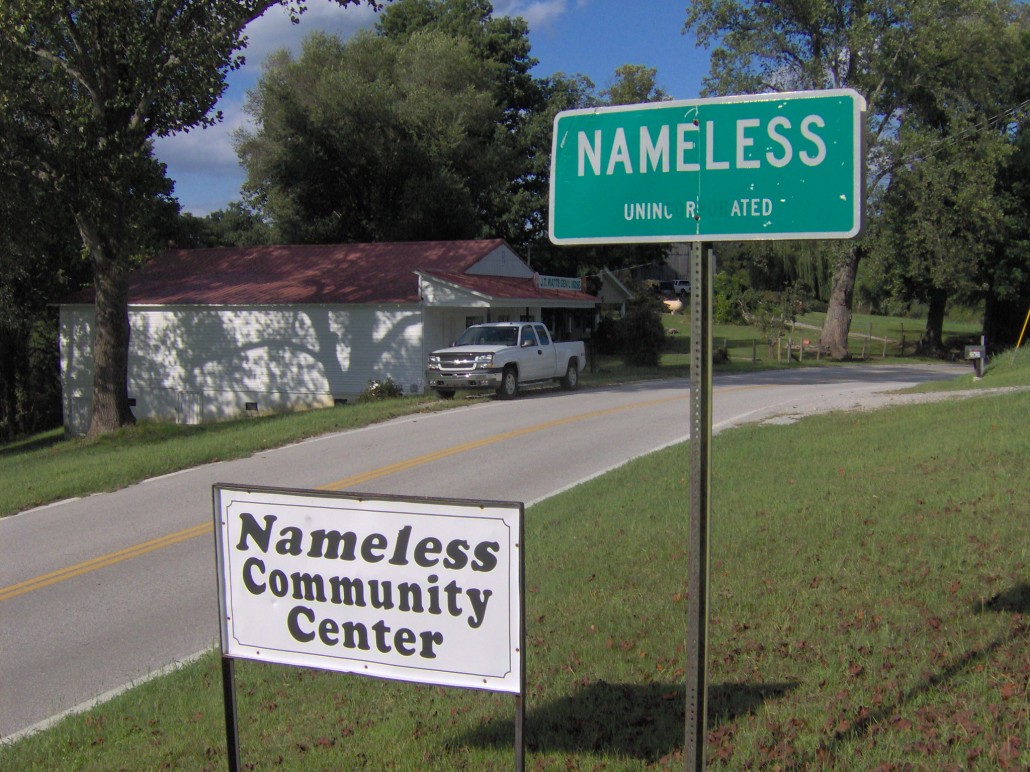 “Nameless, Tennessee, was a town of maybe ninety people if you pushed it, a dozen houses along the road, a couple of barns, same number of churches, a general merchandise store selling Fire Chief gasoline, and a community center with a lighted volleyball court. Behind the center was an open-roof, rusting metal privy with PAINT ME on the door; in the hollow of a nearby oak lay a full pint of Jack Daniel’s Black Label. From the houses, the odor of coal smoke.” 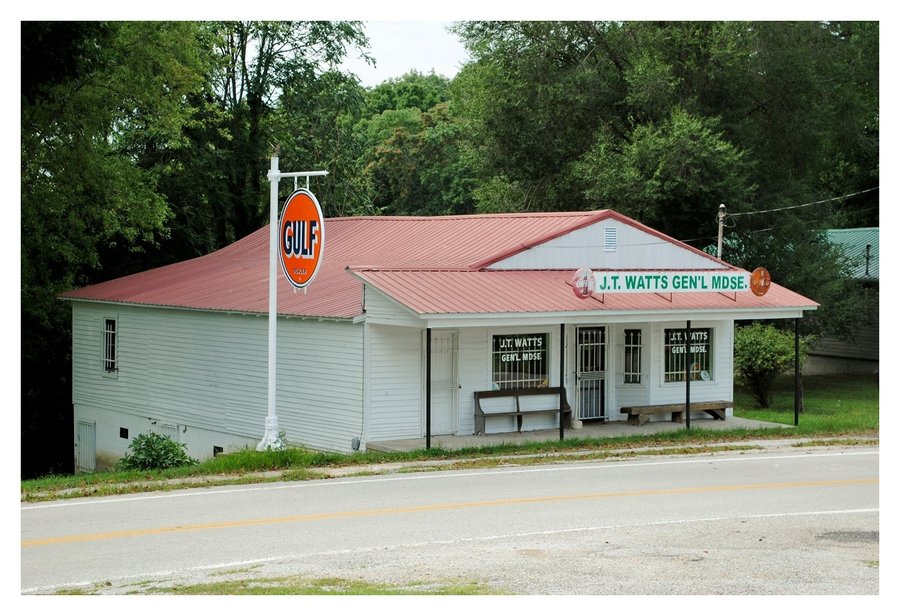 The Watts family owned and operated the general store from 1957 to 1978, when J.T. and Virginia retire and moved to Cookeville. Others who owned the store over the years included J.M. and Nancy Ferguson, Mack and Ruby Myers Brown, Freeman and Bertha Carter Neal, and A.D. and Vida Ruth Ragland McBroom. The Nameless resident who bought the building when J.T. Watts retired converted it to a residence, but the Watts family kept the old store fixtures, and last year, Davis Watts bought the building and he and his sister began restoring it “for the memories. Yes, Nameless has been the subject of several feature articles in papers and magazines,  Davis Watts said “But to us, it’s just home. I’m doing it not exactly as a museum, but just for the memories of days gone by, memories of the life my family enjoyed there,” he said.

The little community located about eight or ten miles from Putnam County on the Shepherdsville HighwayEstablished in 1866, Nameless in Jackson County, Tenn., is believed to have received its odd name from postal officials after residents couldn’t agree on a name.

At its population pinnacle, Nameless had about 250 residents, a post office, an elementary school and some stores.

Arguably, Nameless’ biggest tourist attraction is the “Welcome to Nameless” sign on the highway, including a museum at the former J.T. Watts General Store, where you can stop in an grab a Moon Pie and a RC Cola.

I stepped in and they both began telling the story, adding a detail here, the other correcting a fact there, both smiling at the foolishness of it all.  It seems the hilltop settlement went for years without a name.  Then one day the Post Office Department told the people if they wanted mail up on the mountain they would have to give the place a name you couple properly address a ltter to.  The community met; there were only a handful, but they commenced debating.  Some wanted patriotic names, some names from nature, one man recommended in all seriousness his own name.  They couldn’t agree, and they ran out of names to argue about.  Finally, a fellow tired of the talk; he didn’t like the mail he received anyway.  “Forget the durn Post Office,” he said.  “This here’s a nameless place if I ever seen one, so leave it be.”  And that’s just what they did.

The other telling of the naming of town was provided in a 1933 article in the Jackson County Sentinel newspaper, which said that a local official had initially sought to name the post office “Morgan” for county attorney general George Morgan, but the Post Office Department had rejected that name, possibly because the name “Morgan” was still associated in people’s minds with the Confederacy, including Confederate Army General John Hunt Morgan. According to this version, after the preferred name was rejected the official wrote to federal authorities that if his choice of names could not be used, he preferred for the post office to be nameless.[4] The Nameless post office was established in 1866 and operated until 1909

The town name while unoriginal has inspired a few songs

Learn how to get your music noticed at ReverbNation.com
Sources
Cookville Herald-Citizen articles about NamelessNameless, Tennessee (Song by The Travelers)Online excerpt from Blue Highways:  NamelessTripWow slideshow of Spring City and Nameless by Mary Pardue (including a photo of the Watts Store where William Least Heat-Moon visited)Wikipedia: Nameless
May 10, 2014Off Beat